Back in 2012 I was lucky enough to be invited on a Visit Florida media mission to Europe. The concept behind these missions is to educate the overseas media and tourism industry about all the great things to do in Florida.  This trip included 10 tourism people representing destinations across the whole state. Most of the places were familiar to the Europeans – Miami, Fort Lauderdale and Orlando for example – but the Northwest Florida Gulf Coast left most of the people we visited scratching their heads. In the end we developed a quick phrase to help them position us. “We’re in a different time zone than the rest of Florida; We’re closer to New Orleans than we are to Orlando; We eat grits (at least some of us do!) and we celebrate Mardi Gras”.

That last fact usually did the trick. The people on the other side of the ‘Pond’ were familiar with carnival in Venice, Italy and Rio de Janeiro in Brazil.  They knew about Fasching in Germany and even the UK has its ‘Pancake Day’! Everybody was aware of Mardi Gras in New Orleans, but most didn’t know that Fat Tuesday is an event right along the Northern Gulf Coast.

The first Mardi Gras in North America happened in Mobile, Alabama in 1703. At that time Mobile was the capital of Louisiana and Frenchman Nicholas Langlois wanted to replicate the celebrations he was familiar with from his home in France.

New Orleans caught up some fifteen years later, and that’s the one that has got all the limelight more recently.

What’s this got to do with tourism? Well, not only is Mardi Gras along the coast an excuse to bring in tourists to our area, but its a great reason to do a bit of traveling yourself.

Some of the mystic societies or Krewes start their preparations for Mardi Gras in November and also stage New Year’s Eve balls. Others kick things off around twelfth night (January 6) with parades, balls and king cake parties.

Mardi Gras parades begin along the coast as early as January.  Fort Walton Beach’s Mardi Gras Parade on Okaloosa Island seems to be aimed at the Snow Birds visiting from the north and brings color to the Emerald Coast. However, most of the Fat Tuesday activity really kicks off about two weeks before Mardi Gras itself.  This year Fat Tuesday is March 5. Of course the actual date depends on when Easter falls so can be any time in the early part of the year.

As well as Mobile and New Orleans, parades and celebrations happen in Pensacola, Destin (in fact HarborWalk Village in Destin seem to have a Fat Tuesday parade every week, even in the summer!), Pensacola, Gulf Shores and Orange Beach in Alabama, and Biloxi in Mississippi. The whole of Louisiana celebrates Mardi Gras naturally, and balls and parades happen in Washington DC and Orlando too.  Any excuse for a party!

What can the you and the tourists expect?  Parades of course, with floats, outrageous costumes, moon pies and bead throwing.  It’s said that Mardi Gras in New Orleans is the best free party on earth. Check on the internet for the parade schedules in your city of choice. Some restrict celebrations to March 5 alone, but Mobile and New Orleans have parades almost daily in the lead up to the the big day.

Each Krewe has it’s own theme and the members of the societies spend months working on their floats and costumes. There are the traditional Krewes like Bacchus, Endymion, Proteus and Orpheus, but also more off-the- wall societies like the Krewe of Chewbaccus which themes itself off the Star Wars character and the Krewe of Barkus, which is all about dogs, and the dogs march in the parade! They’re all well worth seeing.

And course there are the Mardi Gras Indians. These are based on Native American Indians and are more correctly referred to as Tribes, rather than Krewes. The costumes that the Indians wear are magnificent and take all year to create. The costumes are so lavish that there’s a museum in NOLA dedicated just to them.

Talking of museums, New Orleans have quite a number dedicated to Mardi Gras and the associated culture.  They are something else to include in your visit planning.

No matter where you’re planning on visiting to celebrate Mardi Gras, food is an important part of the event. The whole idea of Fat Tuesday, no matter where in the world it’s being celebrated, is to finish off all the ‘fat’ food in the house before the fasting of Lent.  The King Cake is the embodiment of this, being rich and invariably fattening.  The origin of the cake goes back to Christian festival of Epiphany (January 6, or Twelfth Night) when the Magi, or three kings, visited the Christ Child.  Buried inside the cake is a small figure. This in itself was based on a tradition from the Roman feast of Saturnalia – it all gets VERY complicated.  Anyway, if you find the ‘king’ figure, you have to supply the next cake, so beware!

If you’re involved in tourism, tell all your guests about Mardi Gras along the Gulf Coast. You’ll be doing them a favor.  And for you?  It’s a great excuse to party. 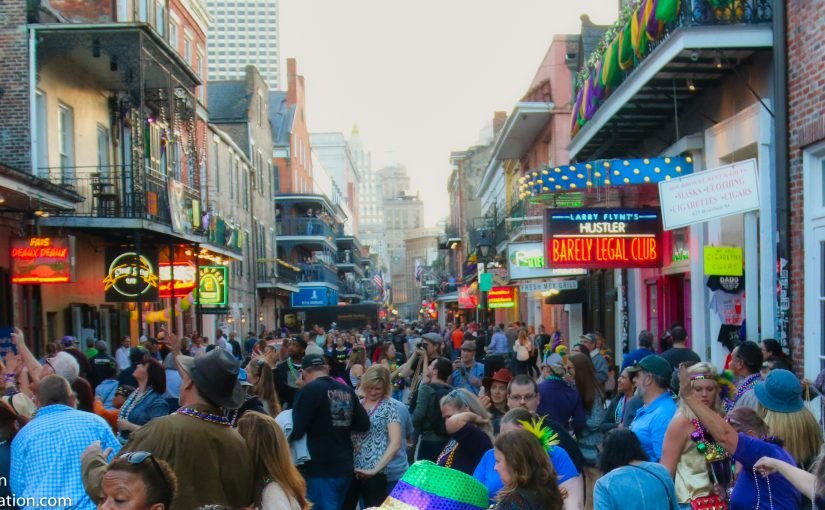